A post-modern scrawler from Brighton –

His audience strove not to frighten –

That shock broods of shrewd prudes:

Instead he just tried to enlighten –

In secondary school I studied Humanities in the form of French, Spanish and Latin (and just one year of Welsh), English Lang and Lit, and Religious Studies, alongside Science in the form of Chem, Phys, Biol and Maths. Torn between "the two cultures," I ended up pursuing the latter as a career. Despite that, I never forsook the former, and carried on playing seriously with language, and was lucky to be able to practise my skills by writing poems and reciting in school Eisteddfodau.

I maintained and developed my interest in language throughout my time at Uni, thanks to the possibilities of the Cambridge Tripos system, reading loads, winning a couple of scholarships, and devoting my spare to time to indulging in "language (sub-)creation." I have developed this since then into a creative study of "language invention" called "aleolinguistics." More information is available here.

I'd been creating poems to support and illustrate the "Enflame Newcastle" and "Enchant Newcastle" series I was writing on "the language of magic and the magic of language." My first foray into poetry performance was at the North East Voices Poetry Slam held in Northumbria University Library in November 2009, which I really enjoyed, despite my trepidation. (Dumped by FaceBook a couple of days prior, standing to recite was one of the hardest things I've ever done, but the atmosphere was so supportive, it spurred me on.)

I was made redundant from my job as Senior Lecturer in Applied Mathematics at Northumbria at the end of 2011, having spent 12 years contributing vigorously to the flourishing mathematics teaching provision, doing lots of admin, and having gained a Royal Society Young Researcher Award in the first couple of years of my appointment. In that time I also had various external roles such as chairing the Science Council's Chartered Scientist Award Committee on various occasions, and working as Lead Moderator for the University's Access to Higher Education course.

When I moved back to Swansea in 2012, I started attending "Poets in the Bookshop" at Tŷ Llên, the Dylan Thomas Centre. I also started Creative Writing and Psychotherapy Practitioner classes with the Department of Adult and Continuing Education (DACE) at Swansea University. I graduated in 2014 with a Certificate of Higher Education (Distinction) in Creative Writing / Psychotherapy (as well a Distinction in Egyptology).

I would like very much to thank my excellent mentors, Andrew Hubbard, and Dr Catriona Ryan (on the writing side), and Ms Dianne Godden and Ms Viv Kelly (on the psychotherapy side). Both of these aspects inform the two threads of my creative work and my ongoing personal development to a great extent. Dr Ken Griffin was a truly inspiring teacher, too, in Egyptology – I wanted to understand hieroglyphs, but quite sensibly, this turned into a study of all of Ancient Egyptian culture and society.

Once I had written and really "worked up" a substantial number of poems, I started to attend the many "open-mic" poetry events that happen all over Swansea (these include "Talisman", "Mad as Birds" and "Howl" – thanks so much to Rebecca Lowe, Natalie Ann Holborow, and Iqbal Malik, the organisers, for their unstinting encouragement and support).

Having honed the poems through performance, and created plenty of new ones, they started appearing in the South Wales Evening Post. I've had 2 poems published in "The Seventh Quarry Poetry" (Issue 32 Summer/Autumn 2020), edited by Peter Thabit Jones, with several more lined up in 2021, I am promised – space permitting – although the competition for space is unbelievable!

In Sandalle’s International “Five ’n’ Ten" Play Writing Competition (2014) I was Runner-up with several submissions in the Five-minute Monologue division. In 2016 I reached the semi-final of the Swansea Poetry Slam at Cinema and Co. In the 12th Welsh Poetry Competition (International English Language Poetry Contest, 2018), I gained a Special Mention for the poem presented here as 'Late Bloomer.' In the Creative Futures Literary Awards Competition (2018), I reached the Short-list (18 out of 500) for 'Chemistry Lessens' (a poem) and 'Chemistry A - Z: An Ultra-Modern Fairy-Tale' (a prose piece); and yes, the theme was 'Chemistry'!

I was a participant in the "New World, New Beginnings" poetry workshop as part of the Swansea University "Being Human Festival" in November 2020. I was invited to perform work I had written, and this was recorded and broadcast; two poems have been published in the resulting collection, edited by Owen Sheers, Professor of Creativity at Swansea, who led the workshop alongside Eric Ngalle Charles.

I also participated in, and contributed work at, the excellent "Writing the Fantastical" workshop (run by Dr Anne Lauppe-Dunbar) as part of the same "Being Human Festival" later in November 2020. I am delighted to say that the piece I produced has now become part of "Tall Tales 2 Leaping."

Chris Norris, Emeritus Professor of Philosophy at Cardiff University, expert in English Literature and Literary Theory, and author of many volumes of philosophical poetry has described my poetry as "... very fine - formally spot-on, vividly imagined and intellectually as well as intuitively agile ... widely ... rang[ing] and with a light touch where needed."

I am now a Tutor in Welsh for Adults with Swansea University's Academi Hywel Teifi, and I am enjoying this new role immensely. I was nominated by four separate students / groups (two groups at the university, and two private students) for an "Inspire! Tutor Award" in 2021.

In 2022, I was most honoured to be nominated by a group of private Welsh for Adults students for the "Chancellor's Award" at Swansea University in the category of "Outstanding contributions to our University's role as a champion for heritage and culture and Wales." I had been teaching this group through the University (on the WJEC/CBAC Mynediad Course) and have carried on working with them privately at their request (on the WJEC/CBAC Sylfaen Course) when no other suitable corporate provision could be arranged. We are now about halfway through the course, and looking forward to attacking Canolradd and Uwch in due course!

I have written around half a million words – bilingually, in both Welsh and English – for the pioneering website "Parallel.Cymru", as well as doing a great deal of editing and translating. This material is also presented (and expanded upon!) here.

I won the "Learners' Prose Medal" in the National Eisteddfod 2016 in Abergavenny, and the Chair in the "Eisteddfod Dafarn" for Learners organised by Swansea University Academi Hywel Teifi in 2018. Here are pictures of the handsome stained-glass trophy (actually curved into a "wave-shape"), and of "y Gadair" I was honoured to be able to keep in my home for a year following the award of the prize. 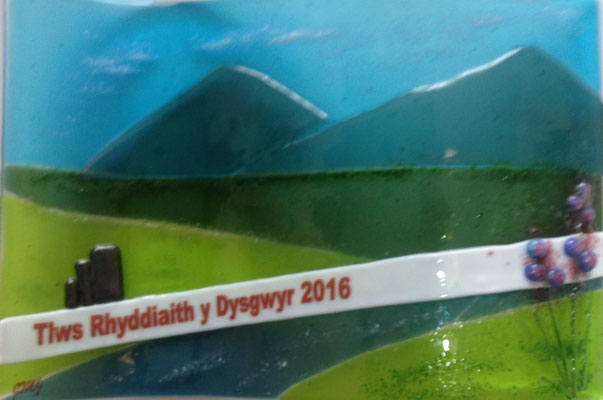 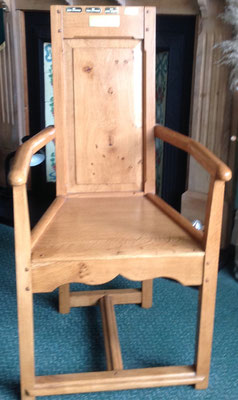 I also run the Study Help UK Educational Consultancy service which supports learners from KS3 to Masters' level throughout the UK. I have been primarily providing help in science and maths, but am now beginning to work more and more with English and Welsh as well.

I really want to thank all my family for their love; and also thank all my current supportive friends in Swansea (the late, great John Birmingham; Mr Adrian Joseph; John and Dr Sue; Lorn, Beth, Chris M, Paul, and Paul S; the truly magical Chris P; Professors Chris and Val Norris, Dr Jeff Gibbs, Dr Karen Reid); and those who've put up with me, and nurtured me previously (especially Cliffy B and Dr Dave Harrison, Ian McGill, Diane Carter, Dr Paul Attinello, Janet Brown, Mr Joseph McAnelly, and Mark Morris in Newcastle). Without you, I would not be here today – "Diolch o Galon"!

The dectet's a doughty little ditty,

Ten lines that scan fine and are pretty;

Feet get hacked off bit-by-bitty;

It holds its shape: quite gritty;

Freeze, if you will;

Then you stop leafing,

And then you die off,

But hearts poke out fingers,

Chow down your isotopes;

[Written for the California Institute of Arts